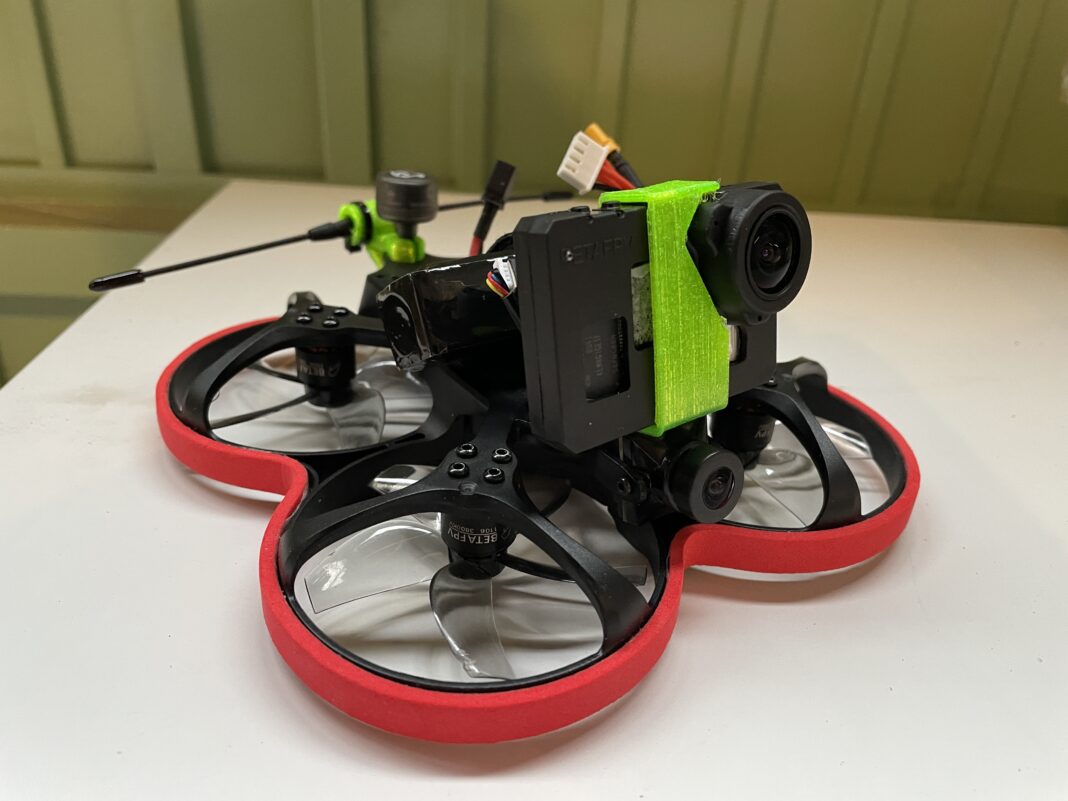 Cinewhoops feel like they’ve been around for ages now. The ubiquitous Shendrones Squirt still seems to be the go-to choice for those looking to capture smooth, cinematic FPV footage with a full-size GoPro.

However, BetaFPV is known for their small, lightweight brushless quadcopters and a few years back, an Italian pilot known as Rimzler, installed the now infamous “naked GoPro” on a miniscule drone from BetaFPV called the 85x – the resulting Dison Mini was a tiny ultra-lightweight FPV drone, capable of capturing 4K video indoors with little risk to people or property.

The Beta 85x evolved into the 95x which is now on its third iteration, and it feels like it has been designed to be the ultimate indoor, cinematic drone, right out of the box featuring 1404 motors (n.b – the version I got was the older style with 1106 motors), Gemfan props, and an all-in-one flight controller and ESC.

I have been flying and testing the Beta95x V3 for a few months now, originally receiving the analogue version and subsequently swapping the VTX and camera out for a Caddx Vista and Nebula Pro for HD goodness. The stock HD version comes with the Nebula Nano camera, which is poor quality and for that reason, I’d suggest buying the analogue version and upgrading it if you want to go digital.

For my day-job I work in marketing and I’m a commercial drone pilot and I have been flying bigger cinewhoops such as the iFlight Bumblebee and the Holybro Kopis for over a year, and while they are stable and capable platforms, they are loud and intimidating for outsiders when flying indoors.

Since unboxing the Beta95x V3, I have flown it in big warehouses and residential properties and it just works. My stripped-down GoPro Hero7 black with BetaFPV’s BEC board and case, is plug and play with the drone thanks to an adapter plug included with the package, however it is really designed for BetaFPV and Insta360’s SMO4K camera – a lightweight and stripped down version of the Insta360 One R camera.

It is however, no surprise that a quad of this size (take off weight with a naked GoPro and 650mah 4S battery is just 220g) struggles outdoors. A decent Betaflight tune is needed to get it to fly as smooth as possible, but this comes at the expense of power, meaning that it is easily blown around by the slightest gust. That being said, on a flat-calm day it can perform outdoors if required.

I also decided to upgrade the antennas from the stock ones to an Immortal T for Crossfire and the Caddx antenna for the Vista to improve signal strength – to achieve this I printed a simple mount from TPU.

Ultimately, the Beta95x V3 is a perfectly capable cinewhoop, with plenty of extras in the box and all the wiring preinstalled for BetaFPV’s own camera or ‘GoPro Lite’ case – one downside is that if you are using a naked GoPro, you will need to 3D print a mount as none are included – the STL files are available for free on the BetaFPV website.

You can currently pick up the BetaFPV Beta95x V3 (analogue) for $189.99 PNP or for a bit more with a preinstalled receiver – of which you can choose Crossfire, FrSky, or Futaba – from the BetaFPV website or from most resellers in your region.