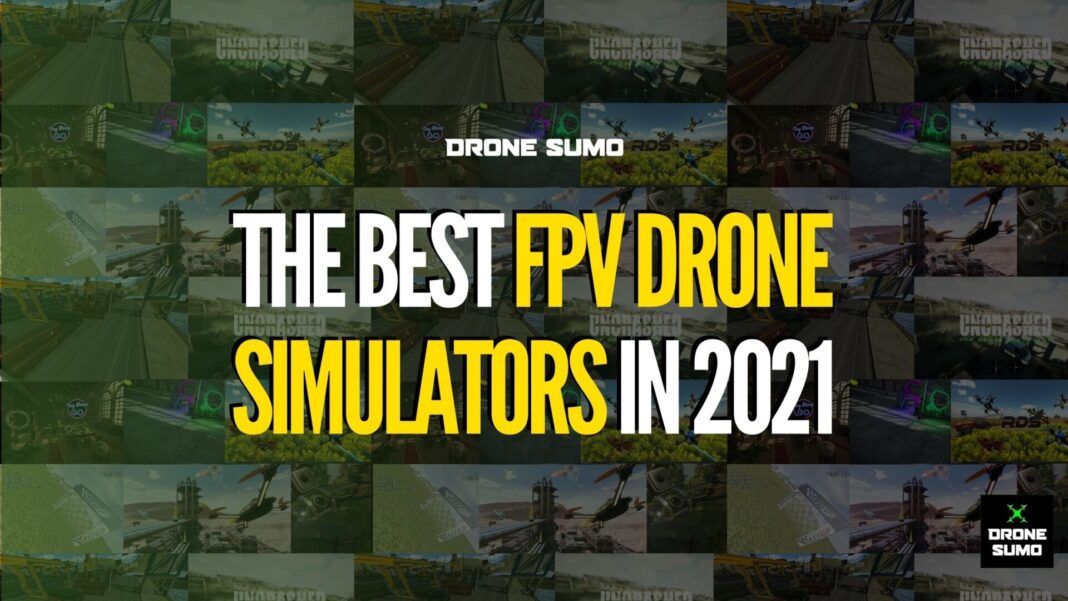 Ask experienced FPV pilots how they learned to fly FPV, or what are some of their practice methods, and many of them will tell you they use the assistance of FPV drone simulators.

Sims are an important facet of the hobby, allowing pilots to push their limits, or get extra practice when bad weather or time constraints don’t allow real flight.

FPV sims are also a great way for new pilots to learn how to fly without breaking things and having to pay for repairs or replacements.

As the hobby has matured and grown, so have FPV simulators, and there are now a fair few options available, offering a much more realistic and fun experience than previous versions.

In this post, we round up the very best FPV drone simulators available in 2022 – both paid and free – so you can make an informed decision before choosing which is right for you.

While some of these simulators are available on consoles such as Xbox and PlayStation, we recommend using them on a mid-range PC or laptop with a radio to get the most immersive and close-to-real experience possible.

Console controllers are usable, but a proper radio made for FPV will offer more precise control and have better carryover to real-life flying.

The Best FPV Drone Simulators in 2022

Velocidrone is one of the most popular FPV drone simulators and with good reason. This sim has superb physics with many users claiming it offers the most realistic experience compared to any other simulator, allowing you to customize the in-game physics and rates and get it flying just like your own quad.

The graphics are a little lacking compared to some of the other sims in this list, but it will work perfectly on most mid-range desktops and laptops, and it makes up for it in fun and function.

Liftoff is one of the most popular FPV drone simulators there is, mostly because it’s available on consoles as well as PC, but its impressive graphics and good physics certainly add to the appeal.

Of all the sims on this list, Liftoff is the most video-game-like as it’s highly polished, fun and easy to just load up and play. There is also an impressive selection of maps, both developer and community-made, and a huge list of quad and part choices to choose from so you can customize your drone just the way you like it.

Liftoff is more focused on drone racing, but there is a fun freestyle mode and it’s the only simulator that offers a 3D mode where you can reverse your quads motors in-flight to simulate 3D flying. Unfortunately, the physics are not customizable in Liftoff (outside of drone customization), but it’s still a superb choice and one of the most fun FPV sims available.

Liftoff can be bought via Steam for about $25.

DRL is the official simulator of the Drone Racing League and as such is, unsurprisingly, heavily racing-focused. If you’re serious about improving your FPV racing abilities, DRL has you covered with a nice selection of obstacle-laden tracks, and an impressive multiplayer mode where you can race against the “ghost” quads of other pilots with slightly better track times than yourself, so you can actively track your improvements.

The Drone Racing League simulator also has decent graphics, customizable physics, and the ability to customize and PID-tune various racing drones – but, as mentioned previously, DRL is more racing-focused and as such, it’s not the best option if you just want to learn and get a feel for flying quads, or if you prefer to freestyle.

DRL sim is available on Steam for around $10.

DCL is another race-focused FPV simulator, developed by the Drone Champions League. The graphics are decent and there are some good maps for both racing and freestyle.

Similar to the DRL sim though, DCL’s strong point is its racing and multiplayer aspects. Unfortunately, the physics are not the best, and it has more of a game feel than a simulator. You may prefer this, but if your main reason for using a sim is to improve and learn real-world FPV flying, then a sim with realistic physics is going to be more beneficial. DCL is also available on PlayStation and Xbox consoles and is the most expensive FPV simulator on this list.

DCL – The Game is available to download on Steam for around $35.00.

Uncrashed: FPV Drone Simulator is a new entry into the FPV drone simulator market, only recently being released. It has the best graphics of any FPV sim as it uses the unreal engine, but the downside of this is lower average frame rates, which can get annoying in fast-paced race modes. If the frame rate drops bother you, this probably isn’t the best option.

Uncrashed also has nice maps and a respectable amount of quad customization settings. The physics could do with a bit of tweaking for a more realistic feel, but this sim has a lot of potential if the developer continues to improve it. If you want a simulator to practice flying FPV with beautiful graphics, and prefer freestyle over racing, this is a decent choice.

Uncrashed is available on the Steam store for about $15.00.

Flowstate is a simple free-to-play FPV simulator. The graphics are adequate and the physics are good enough to give you a taster of what real FPV flying feels like – so if you want to try a sim without spending money, it’s worth a try. The flip side of this is that there’s not much support for beginners as it’s pretty much just load-up and fly. Having said that, some of the paid sims on this list are also not too beginner-friendly so that’s really not a major negative.

Flowstate is available to download for free from the Steam store.

Real Drone Simulator (RDS) is another free-to-play simulator with fairly decent physics that will give you a good feel for flying FPV without having to spend anything. This sim also has surprisingly good graphics for a free game yet still manages to run decently on most PCs.

RDS also has a fair amount of customization options allowing you to use frames and parts from many well-known FPV brands such as Gemfan, Brotherhobby and iFlight. There’s also a career mode where you can collect money by winning races and then spend it on new drone parts.

A downside of free FPV drone simulators is there’s not as much incentive for developers to continue to work on improving their products, so they can be hit or miss if you’re considering investing a lot of time in one. If you enjoy one of the free simulators on this list, consider donating to the developers or at least leaving an honest review to show support.

Tiny Whoop Go is a little different to the other FPV drone simulators on this list due to the fact that it focuses on indoor flying with the use of – you guessed it – Tiny Whoops. If you want to learn or improve your indoor Tiny Whoop flying, this is the sim for you. It’s a lot of fun and has pretty accurate Tiny Whoop physics.

Tiny Whoop GO’s graphics aren’t going to blow you away but they’re not bad and the sim can be played on most mid-range PCs.

LiftOff: Micro Drones is a new entry from LuGus Studios, the developers of Liftoff: FPV Drone Racing, though this one focuses on indoor micro drones / whoops. The game is available on Steam, but it is currently still in Early Access and already has more than one hundred updates.

Liftoff: Micro Drones offers both single-player and multiplayer modes, as well as various indoor environments including a warehouse and a school hall. Each environment has day and night versions, and there are also various racing tracks to choose from.

The game was originally launched with just six micro drone frames to choose from, including a unique hover drone and Le Drib’s signature Driblet S frame. Players can also modify their drones in the game’s Workbench Mode.

The graphics are quite nice for this sim and the physics are decent too with the developers making a few tweaks along the way after community feedback. This sim is a lot of fun and the multiplayer mode has a lot of potential.

The sim costs $15 in Early Access and gives users the opportunity to provide feedback and suggestions on improvements they’d like to see. LuGus Studios are also actively adding new features, frames, and environments to the game. They also say they have plans to add a track editor and additional game modes in the future.

What’s your favourite FPV drone sim? Have one you’d recommend that we haven’t added to this list? Leave a comment in the forums.

Now you’re up to date with the best FPV drone simulators, perhaps you want to brush up on the vocabulary, slang and acronyms used in the FPV community – Check out our Glossary of FPV Vocabulary And Slang.