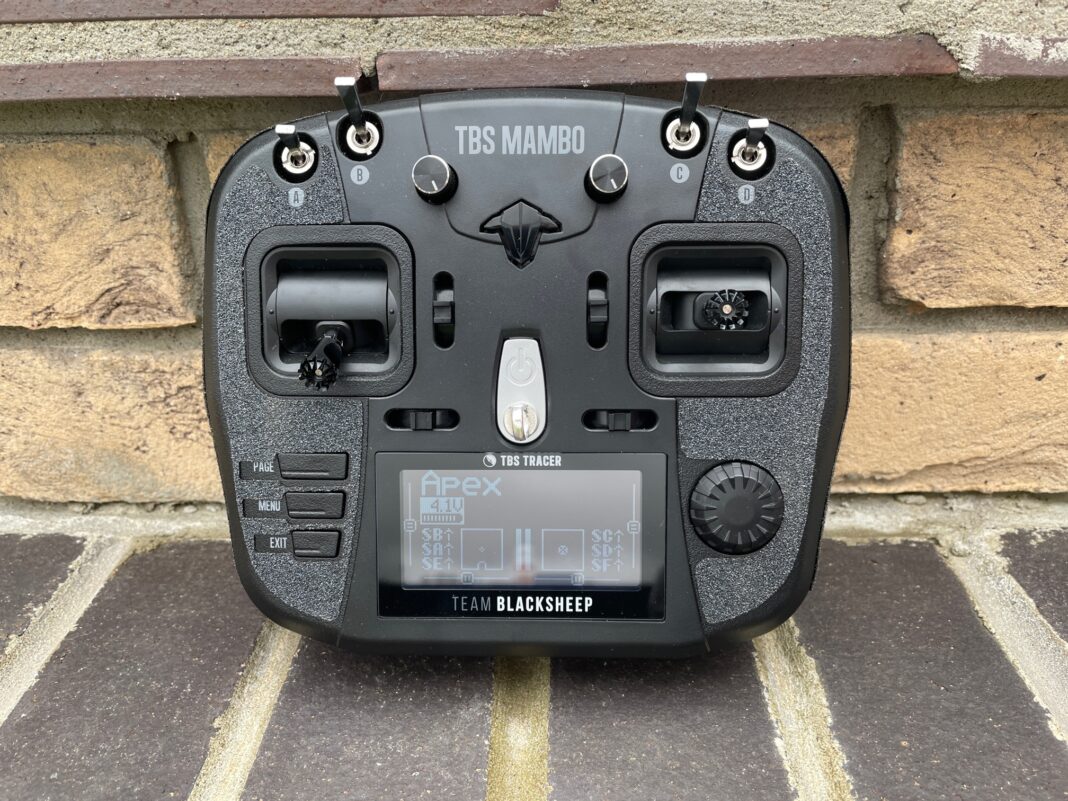 Last summer, Team Blacksheep (TBS) changed the game for FPV radios when it released the Tango 2 with their acclaimed Crossfire protocol built in. The small, gamepad-style form factor, price point and ability for users to upgrade and service it themselves made it arguably the must-have radio for FPV pilots – particularly newcomers to the hobby.

However, later in the year, Radiomaster’s TX16S started to take over. For a start it was a full-size radio with an array of switches, pots, and sliders, making it better suited for fixed-wing pilots. It also had a JR-size module bay allowing users to add on the full-size Crossfire module with its massive 2 watts of output power. Another notable newcomer to the FPV scene was the Ghost protocol from ImmersionRC which runs on 2.4ghz, unlike Crossfire’s 900mhz band, making it a more stable link with lower latency and it quickly became a hit with the racing community.

Now though, TBS is back with a brand new radio, the Mambo, which takes the bits pilots were missing from the Tango 2, but keeps the other benefits associated with it.

The Mambo comes with TBS Tracer built in – TBS’s new 2.4ghz system designed to take on the challenge of Ghost and other systems such as the open-source Express LRS – but it also features a JR module bay, so if you want to fly to the moon on 2w of Crossfire, you can.

It is also a full-size radio, making it better for pilots who want everything on a switch, but with no external antenna, it is still portable and handily fits perfectly in TBS’s own gear pouch, or the Ethix transmitter bag. A particularly nice addition is the inclusion of physical trim switches, which were a noticeable omission for fixed wing pilots on the Tango 2.

The price is low too – starting around £124 for the standard radio – which is achieved by the omission of a built-in battery, and instead there is a bay for two 18650 cells which can be charged through the USB-C port.

Unlike the Tango 2, there is no Pro version with folding gimbals, there is however a co-branded version from Ethix – the company founded by pro FPV pilots Steele Davis (Mr Steele) and Eric Konetzny (Konasty FPV) – with upgrades such as a more textured case for extra grip, a metal kickstand, rubber grips and an included Ethix neck strap.

In the hands, the radio is noticeably bigger than the Tango 2, but still much more petite than the likes of the TX16 or Taranis X9D and the lack of an external antenna (although one can easily be added) makes it much easier to pack in your bag too.

A couple of downsides are that the build quality doesn’t feel up to the same level as the Tango 2, but it still doesn’t feel cheap, and the gamepad-style shoulder buttons are a bit too spongey – the one on the right is a momentary whereas on the Tango 2 it is two-position and that would have been a better option for this radio too. Finally the texture on the standard radio could do with being a bit more grippy, however TweetFPV sells grip kits for the Mambo and Tango 2 in a range of colours for around $10 shipped to the UK and these are a worthwhile investment.

Once again though, TBS has continued to innovate and has boiled the radio down to the bare essentials without it feeling like a toy. The fact that TBS listened to the consumer after the Tango 2 release has paid off resulting in the Mambo being a much more versatile radio with a wider audience, at a price point no one can argue with.

The TBS Mambo is available in the standard and Ethix versions for £124.90 and £159.90 respectively from Drone Authority and other retailers in the UK, starter sets including three Tracer Nano receivers are also available for an additional £60.