The FPV community continues to impress. Just recently a superb bowling alley cinematic by JayByrd Films blew up on social media gaining millions of views in just a few days and catching the attention of various major media outlets including BBC, CNN, NBC and The New York Times.

Now, an FPV pilot who, impressively, has only been piloting for one year, has dropped a Hollywood-worthy cinematic showreel edit showcasing some of his best shots. RemeFPV (Reme Morales) worked with talented video creator Preston Chen to edit his FPV shots together with various action scenes featuring actors playing agents. The result is a 5 minute and 23-second movie-quality reel that holds your attention from start to finish.

Another fact that adds to the impressiveness is that Preston is only 13 years old! Anyone else suddenly questioning their editing abilities? The levels of creativeness and talent that went into this short are mind-blowing from both pilot and editor. What a collaboration this is. We look forward to seeing more content from both.

Where do I start? 1 year ago during Quarantine I started flying FPV in which I spent nearly everyday working on the craft while the streets were empty. I needed to take the time I had off from my airline job of 5 years and use It wisely as I knew I wanted to do something special, especially after the feeling of Immersing myself in the goggles having full manual control of a machine that what ever your imagination wants you can do. This short film is the collection of amazing projects this last year of flying and in collaboration with the wizard Preston Chen we immerse you into the world of the FPV Matrix! 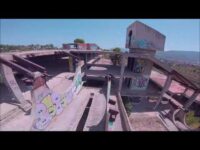