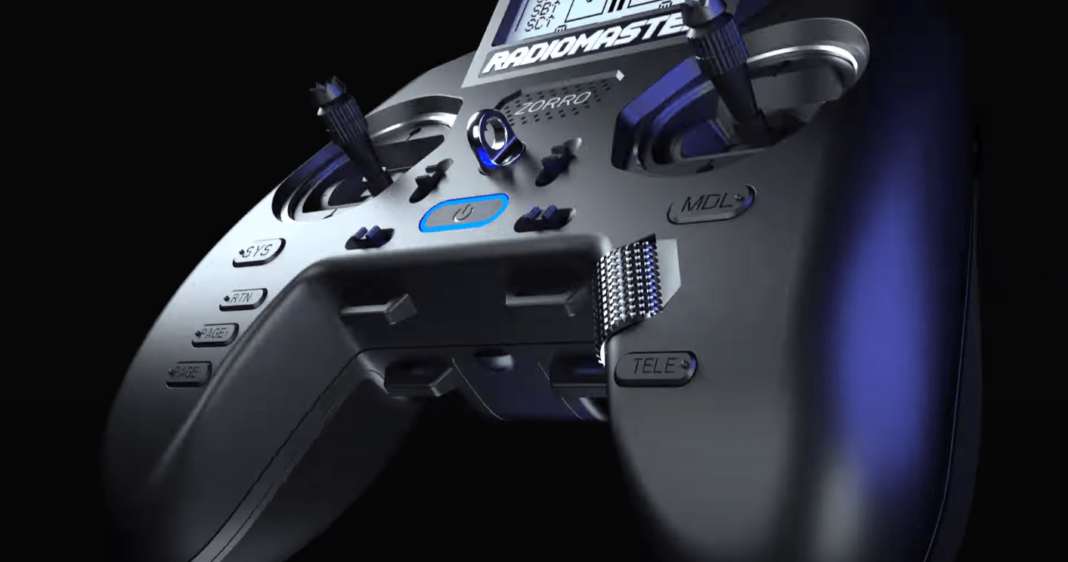 RadioMaster has released a gamepad-style controller, the RadioMaster ZORRO and it looks as though ExpressLRS users will be happy because there is finally a full-feature radio with ELRS built-in.

The RadioMaster ZORRO supports both OpenTX and EdgeTX operating systems and is available in four RF configurations – CC2500, SX1280 (ELRS), 4-in-1 and CCS2500+TBS (Masterfire Combo). RadioMaster also says that the radio is ergonomically designed for comfort.

Physically, the controller has a 128×64 monochrome LCD display with adjustable brightness, a metal roller, adjustable HALL gimbals, replaceable and/or upgradable rubber “non-slip” grips, and the ability to change between Mode 2 and Mode 1 without disassembling. It also features audio output, an SD-card slot, a DSC port and a USB-C port.

The RadioMaster ZORRO is powered by two 18350 batteries that fit in two separate compartments underneath the grips and supports an external 2S battery supply that can be fixed directly underneath the controller to be used as a reserve battery pack.

The antenna is foldable for the sake of keeping the radio compact and transportable when not in use. Accessories can be mounted on both sides as well as on top of the radio via the use of mounting screw holes.

The RadioMaster ZORRO won’t be the first radio with ExpressLRS built in – the BetaFPV LiteRadio 2 ELRS edition has that title – but it will be the first full-feature radio to make use of the increasingly popular open-source radio control link.

It’s also nice to see another gamepad style radio entering the market for pilots who prefer smaller ergonomic controllers, but don’t want to use the Tango 2 for whatever reason.

June 5th 2022 update: This controller has now been out for a few months. I have one myself (ELRS edition) and it is a very good controller, although I won’t write a full review as there are plenty out there already…But, the feedback and reviews from other users have been generally positive too.