The (mostly undisputed) cinematic FPV GOAT Johnny FPV is back with another epic piece combining amazing flyings skills with beautful cinematography, this time in collabaration with Porche – Drive2Extremes to promote the awesome Taycan Cross Turismo.

Shot in the freezing temperatures of the Artcic Circle in Levi, Finland, and the baking heat of the Liwa Desert UAE, this super wide video fulfills its purpose of showing the Taycan Cross Tursimo in all its glory as it tears through desert and snow. This has some of the best, most seemless transitions we’ve seen in an FPV video, and the constant action and slow motion shots keep you hooked throughout. Credit to the production team aswell as Johnny FPV for this hollywood-level cinematic.

This project was epic to say the least. We shot the film on two identical tracks (on opposite sides of the world). The desert track in Abu Dhabi was built completely from scratch, a perfect 1:1 replica of the one in Finland. Mirroring the two created a really interesting contrast of environments, and gave us the ability to seamlessly merge the two locations together in the edit. The goal was to create a piece with 100% seamless transitions.

On the technical side of things, we wanted to develop drones that could effortlessly carry larger cinema cameras. Losing any essence of true FPV agility and performance would be a big failure. Proud to say this was achieved. We shot the entire film on the RED Komodo and FreeFly Wave camera (with the exception of flying through the window, GoPro). 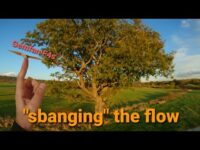