Glossary of FPV vocabulary and slang 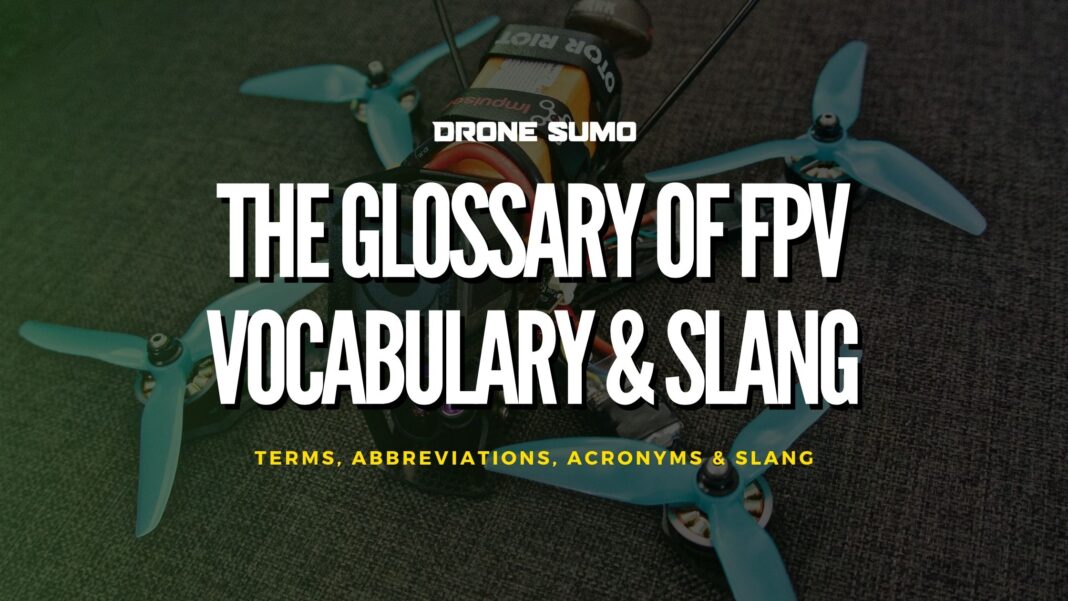 The FPV world has its own culture and expressions that go with it. This is our comprehensive glossary of FPV vocabulary and slang – including terms, abbreviations and acronyms.

If you’re a beginner to FPV (first-person view), some of the terms and expressions used in the community might be hard to understand, especially when it comes to the technical side of building and repairing drones. Then there’s all the slang that’s quite unique to FPV. It can all get a little overwhelming decoding the lexicon if you’re just getting started.

We made this list of FPV jargon to help get you off the ground and conversing like an FPV veteran. The following terminology is commonly used within various FPV circles and situations and we listed it alphabetically to help you find a certain word’s meaning.

A device that measures a drone’s acceleration in the roll, pitch or yaw axis primarily to assist with flight stabilisation.

Short for acrobatic. Acro mode is the fully manual mode in which the pilot is in complete control of the aircraft and has to constantly make manual adjustments to keep the quadcopter under control.

Acro is also sometimes used to refer to a style of FPV freestyle, generally involving lots of flips, loops and gaps. Mr Steele is a good example of an acro (acrobatic) style pilot.

Height above ground level is the height of the drone as measured from the underlying ground surface.

A flight mode that enables a drone to automatically maintain a consistent altitude regardless of external factors, while still enabling the pilot to control roll, pitch and yaw. The altitude hold function is useful for beginners to flying drones.

Almost ready to fly. A quadcopter that requires a few more things before it can be flown

A feature that allows a drone to continue a flight without manual control by the pilot.

A band refers to a group of channels (or frequencies) that an FPV drone can transmit video over. Each band (Band A, Band B, etc.) has eight specific channels, each with different frequencies.

A common feature of modern Lipo chargers is that ensures all cells in a battery have the same voltage at all times. Keeping each cell equally balanced is important as having one cell with an unequal voltage can cause damage and safety issues.

A component within an FPV drone that regulates the voltage. As modern drones use high voltage batteries, a BEC drops the big voltage down to a smaller voltage, allowing the main battery to power multiple components of the drone at the same time.

Binding is the process of connecting and enabling communication between a controller and a drone.

BVLOS (Beyond Visual Line of Sight)

CG or CoG (Center of Gravity)

A drone’s centre of balance.

A drone with built-in collision/obstacle avoidance can sense and manoeuvre around obstacles such as buildings and trees, helping to avoid collisions.

A drone that is used for business, profit or public service.

The largest and most well-known drone manufacturer in the world, located in Shenzhen, China.

Interruption from an outside source that disrupts radio frequency and the operation of electronic devices.

A component that connects the FC (flight controller) and the motor. They essentially regulate the speed at which the motors spin.

Drones that have non-detachable wings similar to that of an aeroplane. Fixed-wing drones are typically bigger and capable of flying longer distances than multirotor drones, but they lack the same manoeuvrability.

A device used to control how the drone moves, by receiving and processing information from the drone’s sensors.

Piloting a drone in real-time through the drone’s camera. Pilots often wear goggles with footage streamed inside.

The body on which a drone is built, housing every other FPV component. Think of it as a drone’s skeleton.

To maintain communication with the pilot and drone through FPV, both pieces of equipment will need to be on the same radio frequency.

A predefined set of virtual geographic boundaries that prevent drones from crossing into restricted areas.

A circular device connected to the drone’s flight controller that allows the drone to remain level.

A drone with 6 rotor arms.

A line is a path of flight that a drone takes. In cinematic FPV a line would determine the shot and angles, while in FPV freestyle pilots string tricks together in a line, and in drone racing, a line will greatly affect lap time and speed.

The type of battery most commonly found in drones.

Line of sight refers to the drone being visible from the pilot’s operating position.

A device inside the flight controller that acts as a compass by measuring the Earth’s magnetic field to determine its orientation.

A small drone. Many have size restrictions.

A drone with 2 or more rotor arms.

An FAA restricted area where drones are not allowed to fly. Above airports and government buildings are prime examples.

System pre-programmed into a drone that alerts pilots to obstacles and collision dangers.

A drone with 8 motor arms.

This is the capacity at which a drone can handle additional weight such as cameras.

A device that links a drone’s battery with other aircraft components.

The movement of a drone in the vertical (up or down) plain.

The angled blades on a drone that enable it to fly as they rotate at high speeds and consequently generate thrust.

A drone with four rotor arms.

A device that links to, and receives the live stream from a drone’s camera.

To push the limits of a flight in terms of aggression or speed. “Watch me rip this bando”.

Moving the drone side to side laterally.

A drone that generates lift by use of rotor blades rather than wings.

The unit of measurement used to estimate the number of times a drone’s motors rotate in one minute.

The unit of measurement used to gauge the strength of the radio signal between a controller and a drone.

A drone that requires no (or very little) assembly and can be flown as received. RTF drones are especially good for beginners to FPV.

Another term for “yaw” – rotating the drone clockwise or anticlockwise.

A component built into a drone that receives and interprets radio signals.

To fly or test a drone with confidence, or without overthinking it. Person 1: “I just built this new quad but I haven’t tested it yet as I don’t want to crash.” Person 2: “Just send it, bro”.

A setting on certain drones that enables it to fly at the fastest speed possible for that model.

The capability of a drone to be aware of its boundaries and positioning.

When flying in FPV, this person keeps the drone in their visual line of sight and observes for any potential dangers that the pilot may not be aware of.

A control that increases a drone’s propellers and motor power.

The lifting force resulting from a drone’s throttle.

Video transmitter. Transmits the video feed from the onboard camera to a display as a radio signal.

The buttons on the side of a drone’s controller that regulate roll, pitch, yaw, and throttle.

An aircraft without a human pilot onboard. Unmanned aerial vehicles, or drones, are operated by a pilot via remote control or onboard computers.

The sensors on a drone that calculate height and balance.

Upright launch is the ability of a multicopter drone to take off vertically instead of the forward momentum that a fixed-wing aircraft needs to take off. Also called Vertical Takeoff.

The lag in video streaming from a drone’s camera to the pilot’s goggles or monitor.

Visual Line of Sight refers to the ability of the pilot to visibly see the drone they are operating. This term is used to define and explain rules by various governing bodies worldwide.

Vertical takeoff is the ability of a multicopter drone to launch upright instead of the forward momentum that a fixed-wing aircraft needs to take off. Also called Upright launch.

Video transmitter. Transmits the video feed from the onboard camera to a display as a radio signal.

WIFI FPV is a type of first-person flying in which the pilot typically views a drone’s live stream via an app on a mobile device’s screen. WIFI FPV is more common amongst less expensive drones.

Refers to the x shape of a drone’s frame.

Rotating the drone left or right through an axis perpendicular to the wings.

Refers to the y-shape of a drone’s frame.