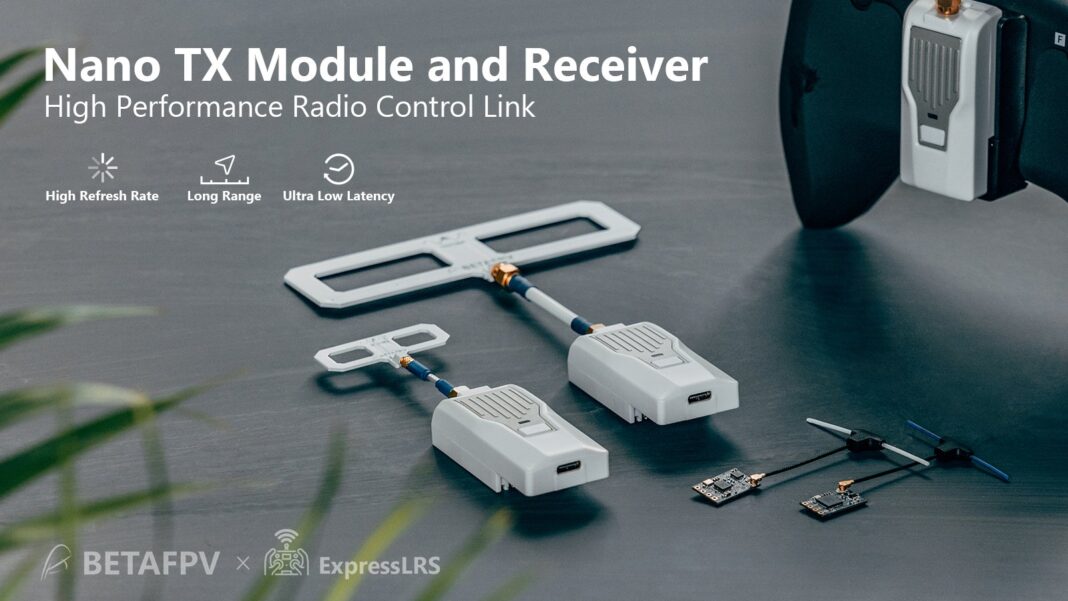 Since the launch of TBS Crossfire, it has taken over the marketplace as the most trusted and stable control link for both long range flying, as well as racing and freestyle.

Its 900/868mhz band is stable, with relatively low latency and will go for miles – almost always outlasting any FPV video link.

The more traditional 2.4ghz band, which came in and displaced traditional crystal radio links, was known to be patchy with little penetration in a bando setting and limited range.

Newer 2.4 systems like TBS Tracer and ImmersionRC Ghost did improve things, but both had drawbacks such as cost, range, and availability of parts.

However, recently the open-source movement has ventured into the control link space, with a group of devs releasing ExpressLRS (ELRS) – available in both 900/868mhz and 2.4ghz flavours, it promises almost unlimited range, super low latency, total accessibility, and plentiful parts.

Originally, the only way to use ELRS was to hack the FrSky R9 system, but now scores of manufacturers are releasing their own ELRS equipment which is cheap and all are compatible with each other.

The one I was sent to test is from BetaFPV who have released nano-size Tx modules and receivers in both 900/868mhz and 2.4ghz varieties.

The first thing you notice is that both the module and receiver are small and well made. The receiver is comparable in size with a Crossfire/Tracer nano but with a considerably smaller antenna, making it great for small and lightweight applications.

Both versions come with a linear antenna as well as a Moxon style one – akin to the TBS Diamond – but the 2.4ghz is absolutely tiny!

While the nanosize module is ideal for radios like the TBS Tango 2, Jumper T-Lite and FrSky X-Lite, to allow those whose radios have full-size module bays to use the equipment, BetaFPV has also released a nano to JR adapter which fits seamlessly into my TBS Mambo.

Setting up the system is childsplay, particularly if you are used to using Crossfire or Tracer, as it uses the CRSF radio protocol, so you set it up on OpenTX as you would the TBS system and likewise, the wiring on the receiver is identical to Crossfire, meaning it was a quick swap into my Zohd Drift model.

The small antenna also makes it easy to install, particularly on a wing, as it takes up a lot let space vertically than a Crossfire Immortal T.

Performance is great and even at 5km out, the control was steady with a high LQ and pretty much zero latency.

As long range FPV grows in popularity and the barrier to entry lowers, the one thing often preventing pilots from going further is a reluctance to invest in Crossfire and the low price point of this and other ELRS systems mean that it feels like a no-brainer. That being said, if you are already in the Crossfire or Tracer ecosystem, then I can’t see any reason to swap.