The 5G Magenta Racing Drone – which sports T-Mobile’s signature pink colour – will harness T-Mobile’s 5G network to stream high-definition, first-person-view footage to fan’s mobile devices via an HD streaming camera. T-Mobile says this is one of the first racing drones in the world to be equipped with an on-board 5G module capable of streaming a live HD video feed to the internet.

At the moment, the drone’s 5G connectivity only benefit’s spectators, but there are plans to improve the pilot’s race experience and competition. DRL pilots currently use analogue radio transmissions as it is the best option for the low latency required for high-speed drone racing, but this sacrifices the quality of live footage that the pilots see in their goggles. As the development of the drone’s 5G capabilities continues, the speed and latency will improve and enhance the pilot’s abilities and race experience. Improvements could also allow spectators to view a live feed of exactly what the pilot is seeing as they race.

But it’s not just the sport of drone racing that will benefit from 5G-capable drones. The President of DRL, Rachel Jacobson said in an interview. “We can help other sports get younger and more tech-focused. We look at this, whether it’s at a baseball game or the Super Bowl or the NBA Finals, where it’s not just about the fans that don’t follow the DRL right now but also about the fans that do. It will really become a win-win.”

Watch a video of DRL and T-Mobile’s 5G drone flying through MLB’s Field of Dreams:

With over 2,400g of thrust, a 5s lipo battery setup for extended flight time, and a dual first-person-view (FPV) system with HD camera streaming, the 5G enabled racing drone is capable of flying through mile-long course at over 60 miles per hour while streaming high-quality, live video footage. As the technology improves, 5G-enabled drones such as this one from DRL and T-Mobile could redefine live sports entertainment.

President of technology at T-Mobile, Neville Ray, said in a statement: “Drones are one of the most compelling use cases for 5G and we’re working towards a future where all drones will eventually be 5G-connected – that’s why we’ve teamed up with DRL to fuel this innovation. With the power of T-Mobile’s 5G network, we’re empowering innovators to completely reimagine virtually every industry and customer experience – from sports entertainment to disaster recovery, to parcel delivery and beyond.”

Watch the Making of the Magenta 5G Drone:

Images and video from DRL/T-Mobile 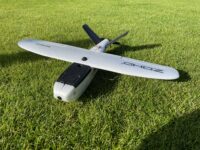