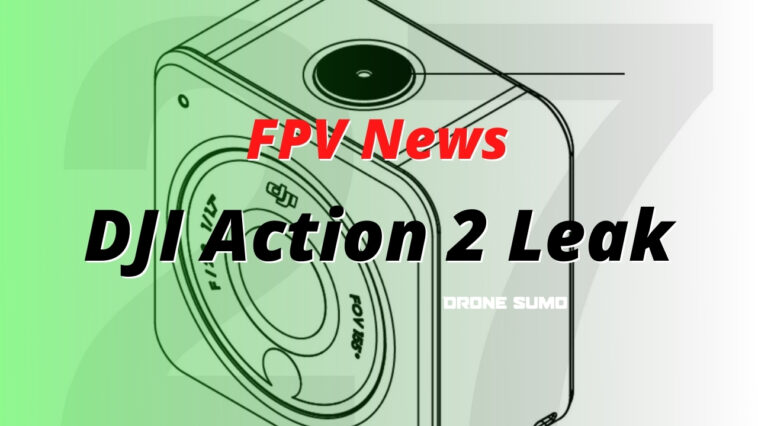 We’ve been anticipating a DJI Action 2 camera for some time now, with the original expected release back in March 2021 delayed for unknown reasons.

It looks as though the release is getting close though as there has been a huge leak. Read on to find out everything we know so far, including specs and features of the upcoming camera.

Jasper Ellens who has a habit of leaking drone news from the biggest drone makers, and calls himself a “DJI Investigator” leaked images on Twitter showing what seems to be the DJI Osmo Action 2. The images include illustrations and in-depth specs providing us with a fair bit of information.

As you can see from Jasper’s tweet, the cube format of DJI’s new camera is reminiscent of GoPro Session. GoPro, having abandoned this format, have left a space in the market for a competitor to fill, and DJI seems to have jumped at the opportunity.

Looking at the illustrations, we can see a button on top of the camera and a connection port on the bottom that allows it to be connected to an external display unit in the same way as the Insta360 ONE R which is a popular choice for some FPV pilots. This external display screen will probably allow you to see what you are filming, and modify the camera’s operating parameters.

The specs of the DJI Action 2 Camera:

The leaked specifications image shows that the DJI Action 2 will have a 1/1.7 inch CMOS sensor capable of outputting 4K in 4:3 at 60 frames-per-second and 2.7k video at 120fps. There’s now also a wide 155-degree field of view which is a significant improvement on the original Action’s 145-degree FOV.

It also features DJI’s own Rocksteady 2.0 electronic stabilization technology which should help shoot smoother and more stable videos even while attached to a drone, in addition to a horizon levelling feature which is something GoPros also offer.

The DJI Action 2 will also be waterproof up to a depth of 10m, and up to 60 metres with a waterproof case – not the most exciting aspect for the FPV community, but a nice feature if you fly over water a lot or intend to use the camera for things other than FPV.

Also shown in the specs list is the fact the lipo is not very big at 580mAh (GoPro Session 5 has 1000) offering a run time of just 52 minutes. You will be able to attach an external battery to the Action 2 however, which will increase the maximum recording time to a whopping 195 minutes. The increase in recording time at the cost of the external battery’s extra weight might not be worth it for most FPVers though.

How much will the DJI Osmo Action 2 Camera cost and what is the release date?

There’s no information on the price or release date just yet, but we will update the article as soon as we know more. We can most likely expect the release date to be before the holiday season, however.

Excited by the prospect of the new DJI Action 2 for FPV use, or are you looking elsewhere for your 4K video needs? Leave a comment below…