BOTGRINDER attaches a taser to a FLYWOO Hex Nano Hexacopter and then flies it around like an annoying giant hornet (or a flying taser as he calls it) to tase his friends. Thankfully, Botgrinder asked his friends if they would volunteer to be tased beforehand and then they got to tase him in return.

I built a real working tazer drone! a flying tazer if you will! watch me hurt my friends with it! also do not try this at home or something, im a profeshunal DronE PiLoT. Tazer drone!!! thanks for watching! 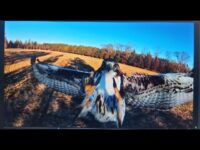