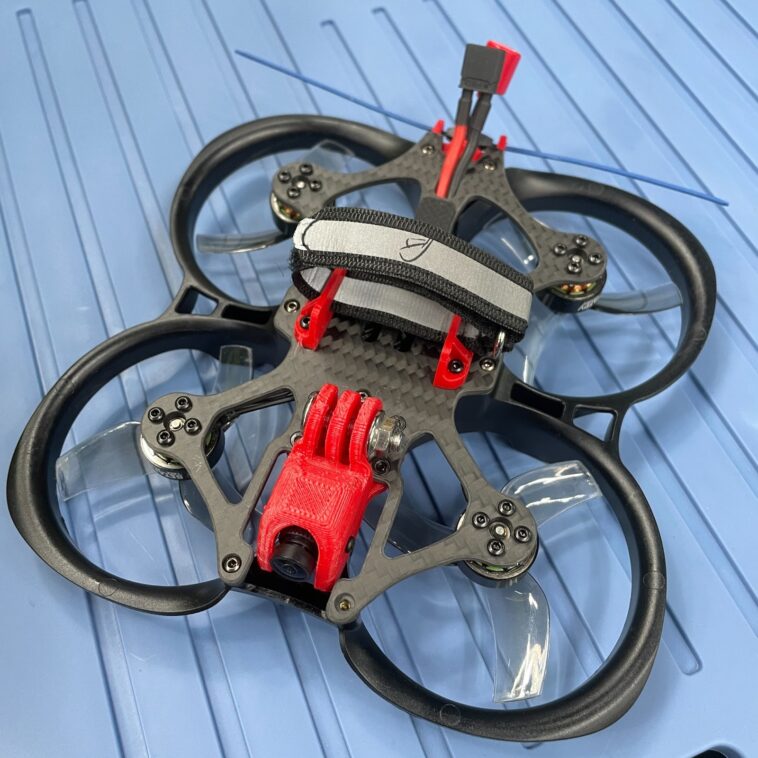 Micro 2.5-inch cinewhoops are gaining in popularity, and with good reason – they’re compact and lightweight quads capable of flying both indoors and outdoors, and through small gaps, with just enough power for carrying an HD action camera for high-quality video capture.

BetaFPV is the latest maker to put forward a micro cinewhoop, the BetaFPV Pavo25. This is a first look at the new ducted, pusher cinewhoop with details provided by BetaFPV. This is not a review as I have not tested it myself yet.

BetaFPV says the new Pavo25 Frame has a simple design with an integrated outer ring. It is made of sturdy PA12 injection moulding material, and includes EVA sponge protection strips on the corners for added protection,

The cinewhoop is designed to be structurally strong, lightweight and compact, and is easy to assemble and disassemble with just six screws. It is versatile, capable of both indoor and outdoor flights and can perform some basic freestyle manoeuvres – and can carry an HD action camera such as a naked GoPro, SMO4K, DJI Action2 or Insta360.

The analogue version comes with Caddx Baby Ratel2 + A03 400mw, while the digital version comes equipped with a Caddx Nebula Pro Nano Vista Kit. The USB port is located on top of the cinewhoop for ease of access.

BetaFPV says that the Pavo25 is designed so that a battery can be moved back and secured with another strap when carrying an HD action camera to balance out the centre of gravity.

The carbon fibre top plate is 2.5mm thick and the HD action camera mount print sits directly on top. At the back of the cinewhoop, there are LEDs encased in a TPU mount. These LEDs feature several modes that can be altered in Betaflight Configurator.

The Pavo25 is available from BetaFPV and the price varies depending on the version and receiver.

This post contains affiliate links. Purchasing through these links may earn us a small profit at no extra cost to you.