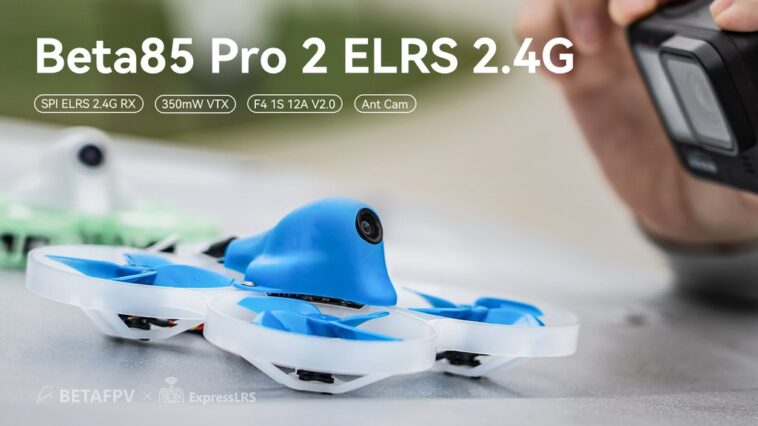 BetaFPV is continuing to take advantage of the increasing popularity of the open-source RC link ExpressLRS offering various antennas, modules, flight controllers and even a radio that benefit from its relatively low costs, yet impressive low-latency and long-range benefits. And now they’ve updated their Meteor range of whoops with ExpressLRS 2.4-ready versions.

The Meteor65, Meteor75 and the Meteor86 ELRS versions all come with an upgraded F4 1S 5A FC (ELRS 2.4g) flight controller with receiver built-in and an M03 5.8G VTX specially designed to increase the range of whoops with an improved power output of up to 350mW.

This is the smallest of the three ELRS whoops from BetaFPC with a 65mm frame and 31mm 3-blade propellers.

The Meteor 75 ELRS 2.4G is the mid-sized whoop from BetaFPV with a 75mm frame and 40mm 2-blade propellers.

This is the biggest of the three ELRS-ready whoops from BetaFPV. It has a frame size of 85mm and 50.3mm Gemfan propellers. It is also more powerful than the Meteor 65 and the Meteor 75, harnessing a 2S battery and more powerful motors.

Combined with BetaFPV’s ExpressLRS edition LiteRadio 2 SE radio controller, these Meteor whoops are a great option for beginners who want to benefit from using ExpressLRS from the start or generally anybody who wants further range on their whoops for outdoor flying or racing without paying the higher costs of other advanced RC links.