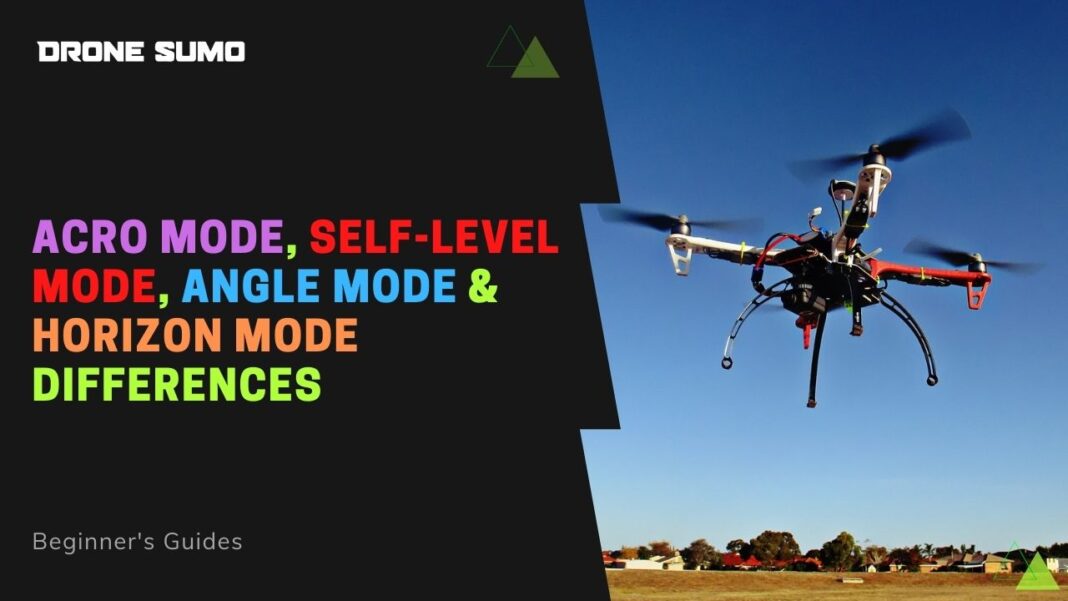 There are a few terms in FPV that refer to the different flight modes used when flying multirotors such as Horizon, Angle, Rate and Manual modes but they all generally fall under the two main flight modes – Self-level mode and Acro mode.

These modes are determined by the drone’s onboard flight controller settings and how it controls the motors and assists the pilot with flying. This post will explain the differences between each flight mode and what effect it has on flying a drone.

In a Self-level mode, the flight controller assists in flying by returning, or keeping the drone in its ‘levelled’ orientation when the pilot lets go of the controller’s sticks. These modes are useful for absolute beginners to flying drones or for flying indoors, or in spots with tight spaces.

In Betaflight, Horizon and Angle modes are both Self-level modes, but with a slight difference between the two.

In Angle mode, the drone’s roll and pitch are limited to a maximum angle, so even if you push the sticks to their maximum position, the drone will not flip or roll beyond the user-defined angle (generally 45 degrees). When the pilot releases the sticks, the drone will return to its level orientation.

This flight mode is very similar to Angle Mode – the only difference being that the drone will flip and roll when the sticks are at full deflection. Doing acrobatic-style rolls and flips in this mode is quite easy as it is as simple as flicking the stick and allowing the drone to return to its levelled position.

In Acro Mode, also known as Manual Mode and Rate Mode, there is no assistance in levelling, and instead, the drone’s role or pitch will remain at the same angle of orientation when the pilot lets go of the sticks. In this mode, constant manual adjustments are needed to keep control of the aircraft and avoid crashing into the ground (or an object).

Acro mode takes much more precise control and skill to pilot than either of the Self-levelling modes. If the stick is pushed to full deflection in either the flip or roll orientation, the drone will correspondingly and continuously flip or roll at a constant rate which can get a little disorientating.

To remain in control of the drone, the pilot will need to manually orientate on the appropriate axis, either by pushing the stick back in the opposite direction, or completing the roll or flip until the aircraft is level again.

When to fly Acro Mode?

While the Self-level modes are great for complete beginners to FPV or for flying indoors and in small spaces, I recommend flying in Acro Mode as soon as possible – This is because your overall flying abilities will improve much faster once you start practising and you will eventually have much more control and smoother flights than flying in the Self-level modes.

Acro Mode is essential if you intend to become a master at racing, freestyling (doing tricks), or shooting epic cinematic shots in future – and perhaps, most importantly, it’s just a lot more fun once things start to click.

If you don’t feel confident enough to dive right into flying Acro Mode, I’d recommend getting in at least a few hours of stick time with an FPV simulator with a controller plugged up so it feels as close to real flying as possible. Here’s a list of the best FPV simulators currently available to improve your acro flying abilities without the real-life consequences.

New to FPV and want to learn the lingo? – Check out our Glossary of FPV Vocabulary and Slang.